When I bought Desiree, she came in several pieces - some of them identifiable even by someone with only a passing familiarity to boats. The hull, mast, wheel and sails all fit into that category. Then there are several pieces that are identifiable only in what they are - not where they go or how they go together. Locker doors, drawers, teak cup holders, handrails and more are all in that category. However, the king of this second group has no equal when it comes to the blocks.

Lignum Vitae: The Tree of Life


Lignum Vitae is latin for "The Tree of Life."  It is the national tree of the Bahamas and is known for its oils, strength and density. Around the boatyard, it is pronounced lig-nuhm vahy-tee.  Latin scholars beware: the second word is not pronounced vee-tay as in "curriculum vee-tay" - at least not in the boatyard. I suppose it goes back to fishermen pronouncing fillets as "fill-ets" and main salons as "saloons." So, when in Rome, don't order Sushi.

At any rate, Desiree boasts 22 blocks made of the stuff - only 3 of which I'm certain of their location and another 4 of which I'm only "reasonably" certain. After that, it's kind of a crap shoot. I am banking on some photos and schematics along with my not-so-novice knowledge of traditional gaff rigged vessels to get them all in the correct place. Frankly, I'd be shocked if a fair amount of "trial and error" didn't seep into this - probably enough error to result in a mistrial.

When I acquired Desiree, all the blocks were pulled apart.  The sheaves, tangs, pins and shackles were all separate from the shell. This was the proverbial two-edged sword.

On the one hand, this was a huge time saver as it made it easier to varnish the shells. On the other, it has made putting them all back together an advanced exercise in spatial mechanics.

The prior owner had organized each block so that all the pieces were together - or so I thought. However, none (save the Boom Block) were labeled as to their function. To preserve the order, all the presumed pieces of a particular block were assigned a numbered zip-lock bag and the corresponding shell was tagged with that number.

Then I hung all the shells from the cellar rafters so that I could varnish the whole shell at one time.  The effect was not unlike a bunch of shrunken heads in Torquemada's little shop of "Things to Do of an Evening."

I did not sand in between each coat, as the goal here was to get several coats of varnish on these shells as quickly as possible. As in many things (such as this blog), perfection can be the enemy of the good. At any rate, ten coats later, we're ready to put these together. 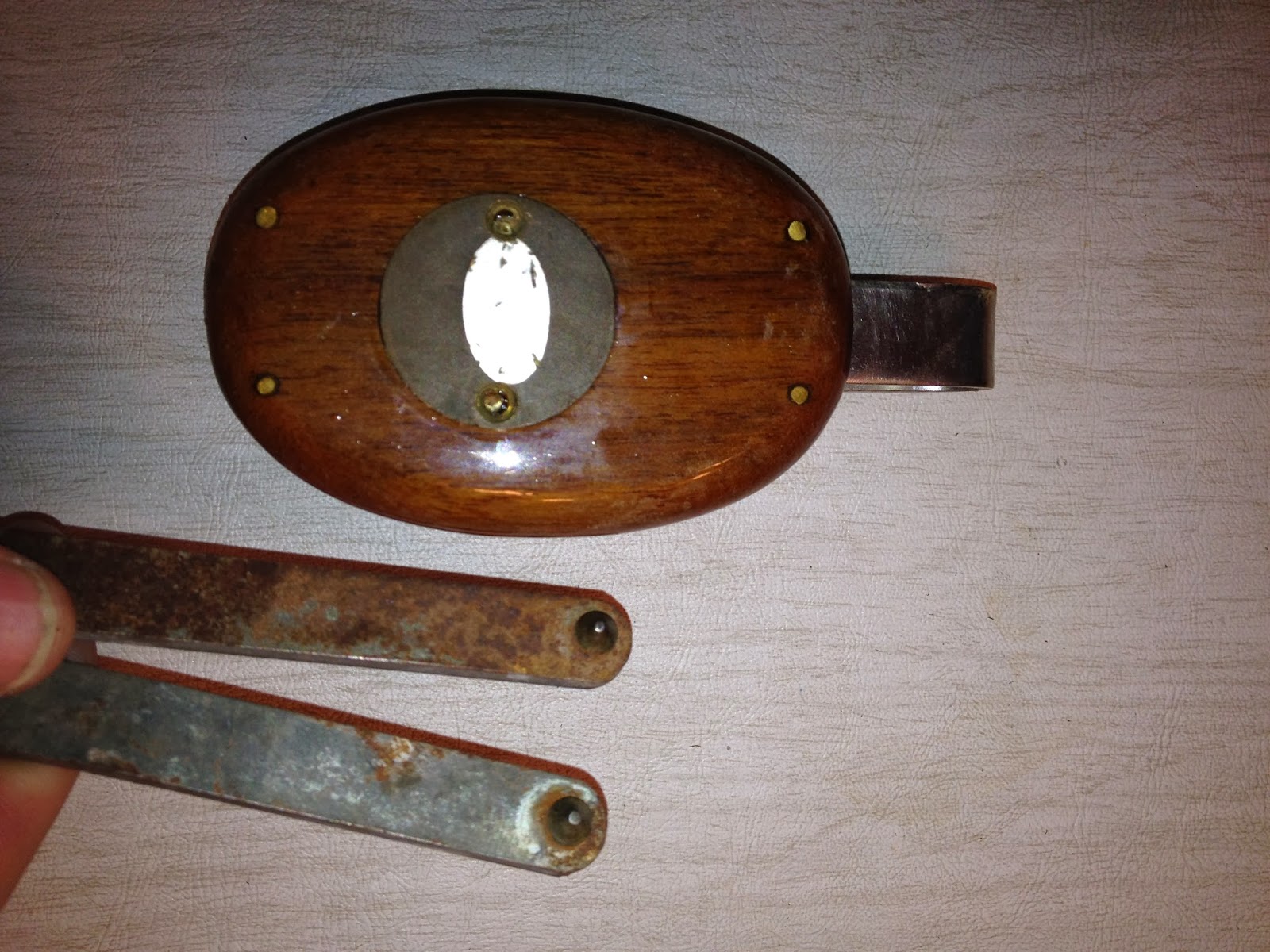 One little tool that proved invaluable here is shown at right. This is a custom tool similar to the tool used for removing deck fuel and water caps and is designed to hold one flange in place while you screw the pin into it from the other side. Each flange is embedded about 1/16 of an inch and held in place by a tight fit and two screws.

During the assembly process, it became obvious that more than once,  the tang (or screws or pin or sheave) for one shell was in the bag belonging to another shell.  Not a big deal, really, but it did slow the process down while I found the correct match with all the excitement of an archaeological dig.

Some shells, like #3 here, came apart completely. So, back to shop for that one.


On the whole, however, most everything was together. Of 22 blocks,
only 8 will need additional work ranging from missing screws to rebuilding the block .

In one way, the saving grace to taking on this restoration is the sheer volume of work to be done. This means that there is plenty to be done in the boatyard (see "Separation Anxiety" post) and plenty to do in the shop.

In New England, we are experiencing our third straight snowfall in as many weeks. While we don't have a monopoly on cold conditions this year, working in the boatyard in sub 25 degree temperatures gets old real fast.


When that's the case, it is nice to have plenty indoor work to do.