Early on, it was clear that the cabin top of Desiree would need to be replaced (see, Up on the House Top and Separation Anxiety February 5th & 23rd). I have already mentioned the process of removing the old housetop, but have not commented much on the trials and tribulations of the actual replacement.  I suppose the reason for this is, it is about as interesting as waxing trees and watching squirrels slip. It is laborious and repetitive. However, if you want a good job, it is worth taking your time through each step. If I have learned anything, it is that while prep work is not sexy, it is what makes or breaks any project.

So, this post is for you if you are in the process of replacing a cabin top - or something similar. If that is you, all I can say is, you need to get out more. Really. Go.

Still with me? Here we go. Once the cabin top was off, other things become obvious. For example, there was some delamination on the sides of the cabin. This was dealt with by grinding away any really bad glass first. Anywhere the glass was solid but not sticking to the cabin sides I filled the gap with epoxy via a syringe. In some places, I drilled holes in the glass to allow a greater reach of the epoxy. Again, a syringe was the thing to get the epoxy in those spots.

A quick note about using syringes. They're great and very useful. However, as you don your latex gloves and fill your syringe with epoxy, Walter Mitty visits and you can't help but feel like the world's foremost surgeon. In fact, I found myself saying to the boat before I injected the epoxy, " OK, you might feel a little stick and some mild discomfort" (C'mon, admit it. You've done it too.)

The other thing that made sense was to refinish the teak frames before replacing the cabin top. This allowed better access to sand more effectively into corners and edges. It also made the brush work easier.

Once that was done, I could focus on the cabin top proper. The process called for three layers of 1/4" okoume in the after section and four layers of 1/8" forward.

The nub of it is, it takes awhile. The cutting and fitting process is not straight forward on a boat. Boats are a collection of curves - it is what gives them style. It also means you will seldom ever cut just a straight line and expect it to fit.

Moreover, each layer is secured to the underlying layer by thickened epoxy and screw heads are covered over with the same. Epoxy takes a day to cure well and each layer should be sanded smooth before proceeding to the next layer. So, the whole process takes time.


In the photo to the right, you see the third - and final - layer on with the hatches rough cut out.

One of the trickiest aspect of this part of the project was trimming the edge flush with the cabin sides. The reason for this was twofold. First, I'm a novice at this and I am learning as I go. Second, the arc of the house top makes getting a good measurement a bit awkward especially as the cabin is rounded in the front.

I was able to do a reasonable workman-like job using a two step process. First, using a skill saw, I rough cut the top to within two inches of the sides (I may be a novice, but I can at least accomplish that). However, since the final cut had to be a lot closer, I needed to scribe a very accurate line on the house top that told me where the cabin side ended and air began.

A shipwright in the boatyard, solved the problem for me: create a tool shaped like a "c" clamp, the bottom section of which rides along the cabin sides and top of which scribes a line. The part that makes the letter "c" must be wide enough to accommodate the overhang of the cabin top. Using strapping left over from the frame, I made a tool that looked more like a "G" than a "C" so that the bottom of it had a long, flat guide I could put flush against the cabin side. My pencil went into a hole at the top directly above the edge that would ride along the cabin side. In this way, I had a line that told me exactly where the cabin side stopped.

The next step was to round the edges of the cabin top. Originally, I thought a router would be thing to use, but that proved to be too complex. The reason for this is, again, the arc of the house top. To get a straight up and down cut, the angle of a router would have to be continuously adjusted as you went. Additionally, any jig would need to be constantly adjustable as the arc changes as you move forward along  the house top.

So, deft use of the orbital sander and a good eye (and some hand sanding) provided a serviceable and pleasing rounded edge.

Before I could get to the fiberglassing of the cabin top, there were a couple of other details to deal with. The first was to fair any obvious depressions in the cabin top. Remember, the cabin top is like the hood of your car. As you sit in the cockpit you will be looking at it most of the time. More importantly you will be looking at it at just the right oblique angle such that any depressions in the top will be obvious and they will be a constant reminder of the importance of taking the time to get the prep work right. Anyway, I find that West Systems 407 filler is the best stuff for this as it fills and sands easily.


The other detail was to cut a hole to accommodate the chimney for the wood stove. Using the old flu and a plumb bob, I marked the center of the hole I needed and then drilled up from the cabin.  From above I drew a 6" circle around the center hole and cut it out with a jigsaw. After all the time spent getting the top in place, I must admit to a real reluctance in cutting into the top, but the chimney has to go somewhere.


Once all that dried, I was ready to glass the cabin top. Since this is a cabin top and will not get a lot of foot traffic, I chose 6 ounce cloth.

There are many sites and videos outlining this process so I won't go into detail on this stage, but I will point out a couple of things not generally mentioned that made the job easier. First, once all the cloth is laid out, smooth it out with your hands starting in the center and moving your hands to the edges. Take your time and go through several smoothings - you want it to lie as flat as you can get it. Also, leave it out overnight as it will start to take the shape you want on its own.

Second, when it comes time to apply the epoxy, having someone else mix the pots and hand them to you as needed is a huge help. On a relatively small job like this, you could do it alone, but the pot, your trowel, your gloves and brush all get slipperier than two snakes in a bucket of snot and moving back and forth from your work area to the epoxy containers will make the job less pleasant than it already is.

From here, I will put on at least two more layers of epoxy and follow with a primer coat and top coat(s). The state of the tide out there is that Awlgrip is the topcoat to use for durability, etc. However,  I know of several yachtsmen who opt for a single part polyurethane such as Interlux. Whichever you use, the key is in the prep. Both products will look shoddy if the work underneath is.

If you have followed me this far, you may have noted that Desiree  has received a change of venue. In late June, space became available indoors at our boatyard. This has been a huge boon as progress can move forward regardless of weather with lot more elbow room. In the photo below, you see her in the shed, glass laid out on her cabin top and her spars on saw horses. You will also note, her gammon knee is missing. The bow is a story for another time as is the reconditioning of the spars . . . .  Stay Tuned. 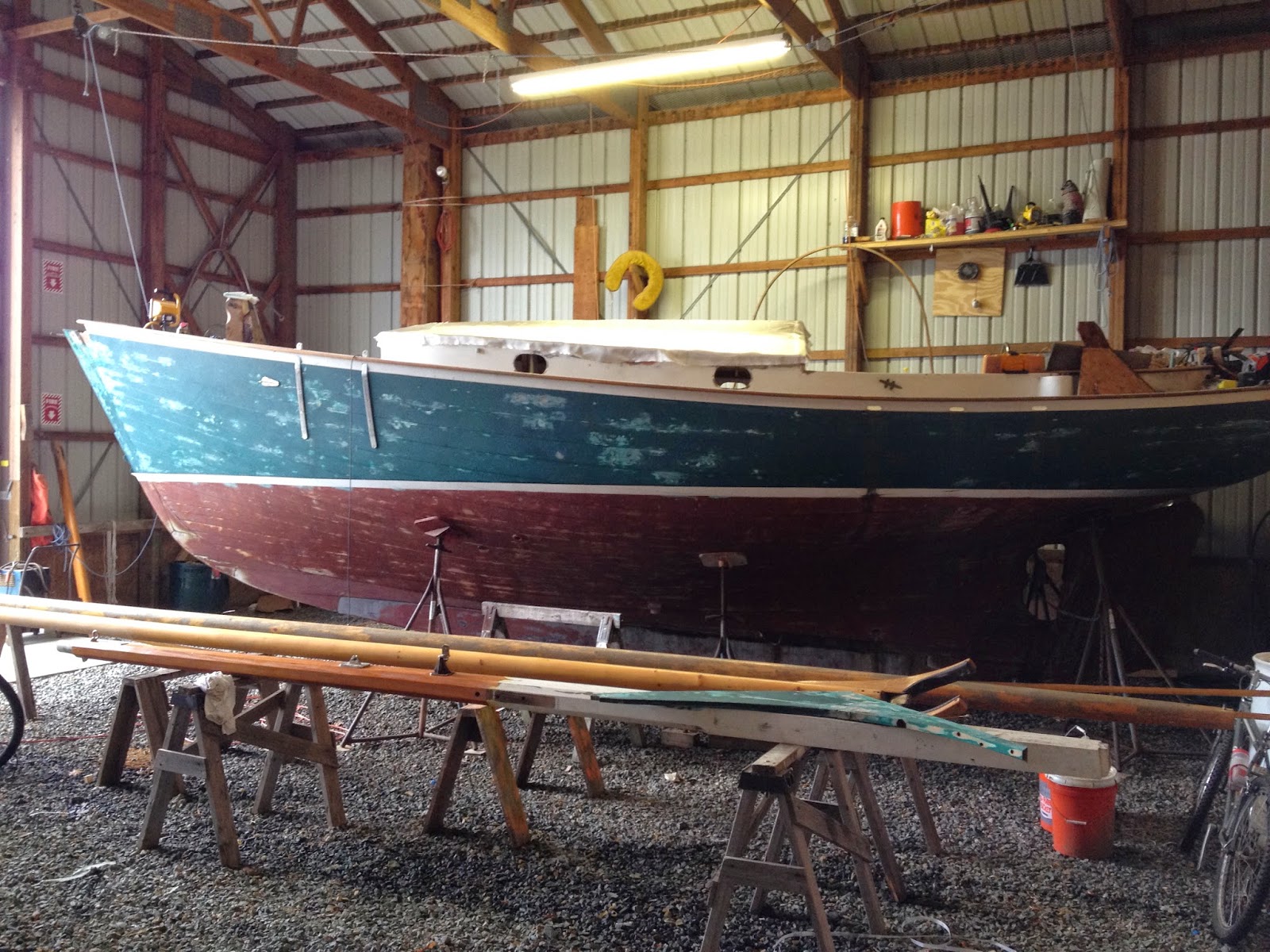