In an earlier post (Cabin Top Reconstruction), I noted that I had removed the gammon knee. The gammon knee is located right under the bowsprit and is what gives the Friendships the clipper-like bow.

On Friendships, the gammon knee is entirely ornamental - supporting nothing but the billet head (aka figurehead) and the trailboards.  The bowsprit on a Friendship is secured by the opposing forces of the fore, bob and whisker stays and the samson post.

The reason for removing the knee was because of (more) delamination of fiberglass. As mentioned earlier, Desiree's cabin and deck were sheathed in fiberglass, but it appears to have been done with polyester resin, which, I've been told, does not create as lasting a bond as epoxy resin. At any rate, it came away from the knight heads under the forward chocks and separated from the deck on the port side. If you click on these photos, you'll see it better.

It was also obvious that the stemhead had been abused by the elements over the years. As the stemhead is the end of a large oak member, it's end grain was open to the rain, snow and whatever. Thus, moisture moved down the stem creating some rot. 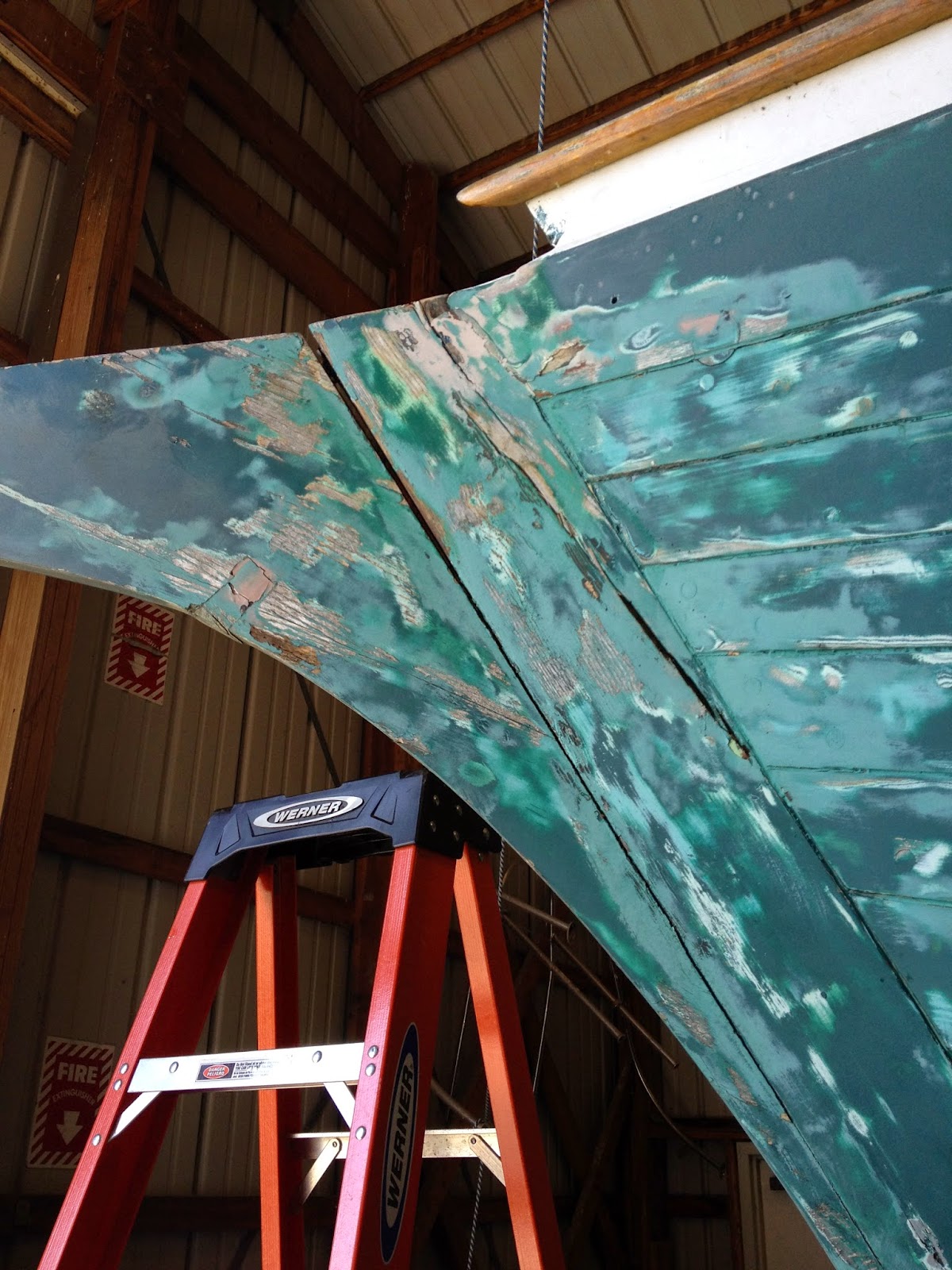 Fortunately, even though water moved down the stem, it created it's own path out. In the photo to the left, you see what appear to be two cracks in the stem. The left "crack" is where the gammon knee is separating from the stem due to rot in the top of the stem (there is a lag bolt that secures the top of the knee and as the top of the stem rotted, it has given way).


So, the only thing to do at this point was to start cutting away the delaminated glass back to good glass and see what we've got.

Here's what we found. Underneath the rail cap on the starboard side, there was a significant seam of rot in the knighthead on the starboard side.   It was clear that it went below deck level and I had visions of finally finding the one thing that would make this a very long and expensive renovation. The real question now was, how far down does it go?

So, there was nothing else for it but to pull up the fiberglass and the deck underneath (note how the 'glass came up in one nice big sheet. Never use polyester resin is the lesson, I guess). After removing the first layer of decking (there are two layers of plywood), it was obvious there was moisture.


What amazes me is this boat has been under cover since December of last year and water that seeped in before then is still there! The storal to the morey here is, once moisture gets in, it sits there until it causes rot.

These two shots show the bow with a section of the deck gone and breasthook removed. The photo on the left shows that the rot on the starboard side only goes down to just below the top of the breasthook. The photo on the right shows the port side which looks pretty good. The through bolt in the picture comes through the stem and secures the breasthhook. 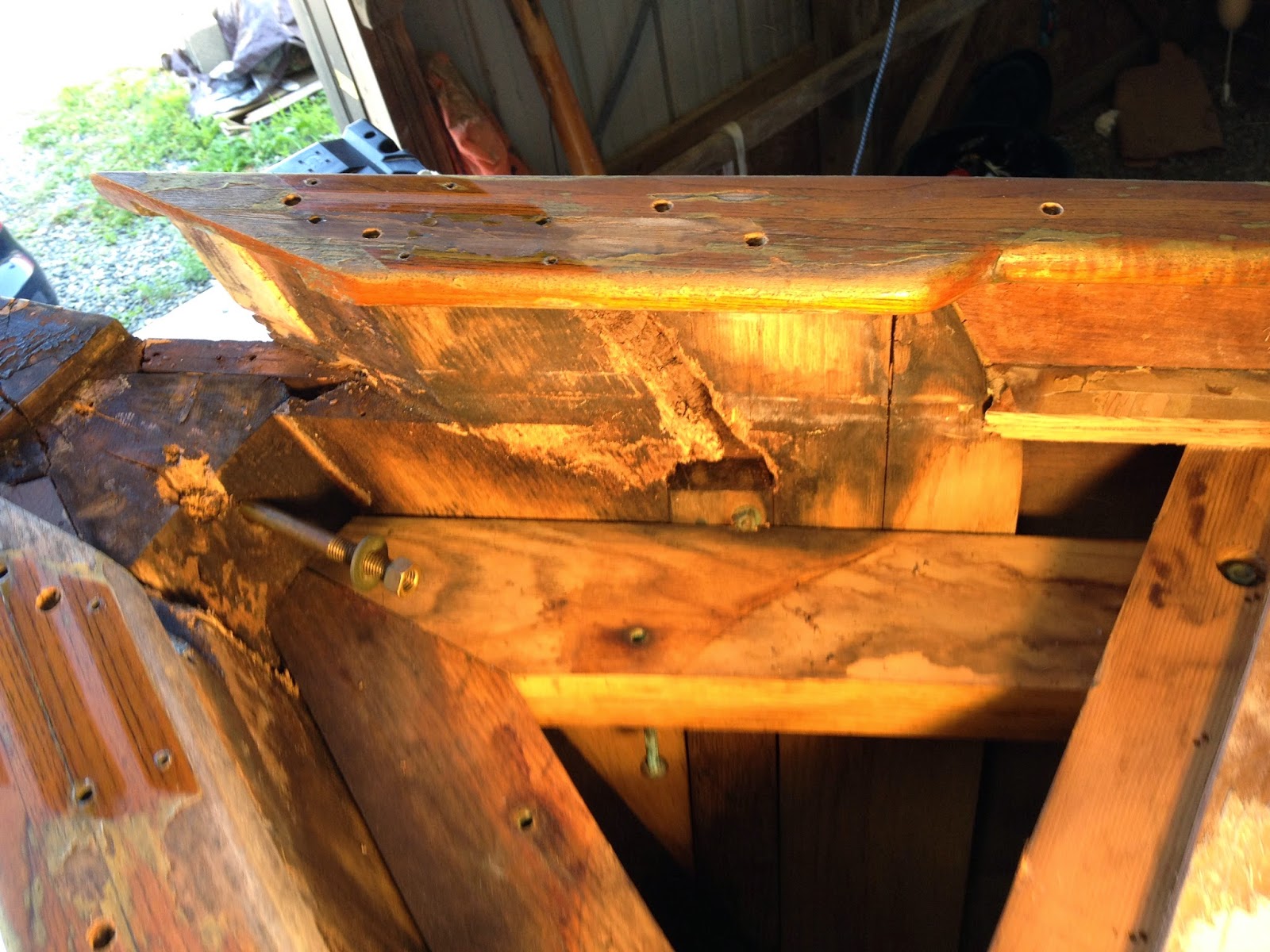 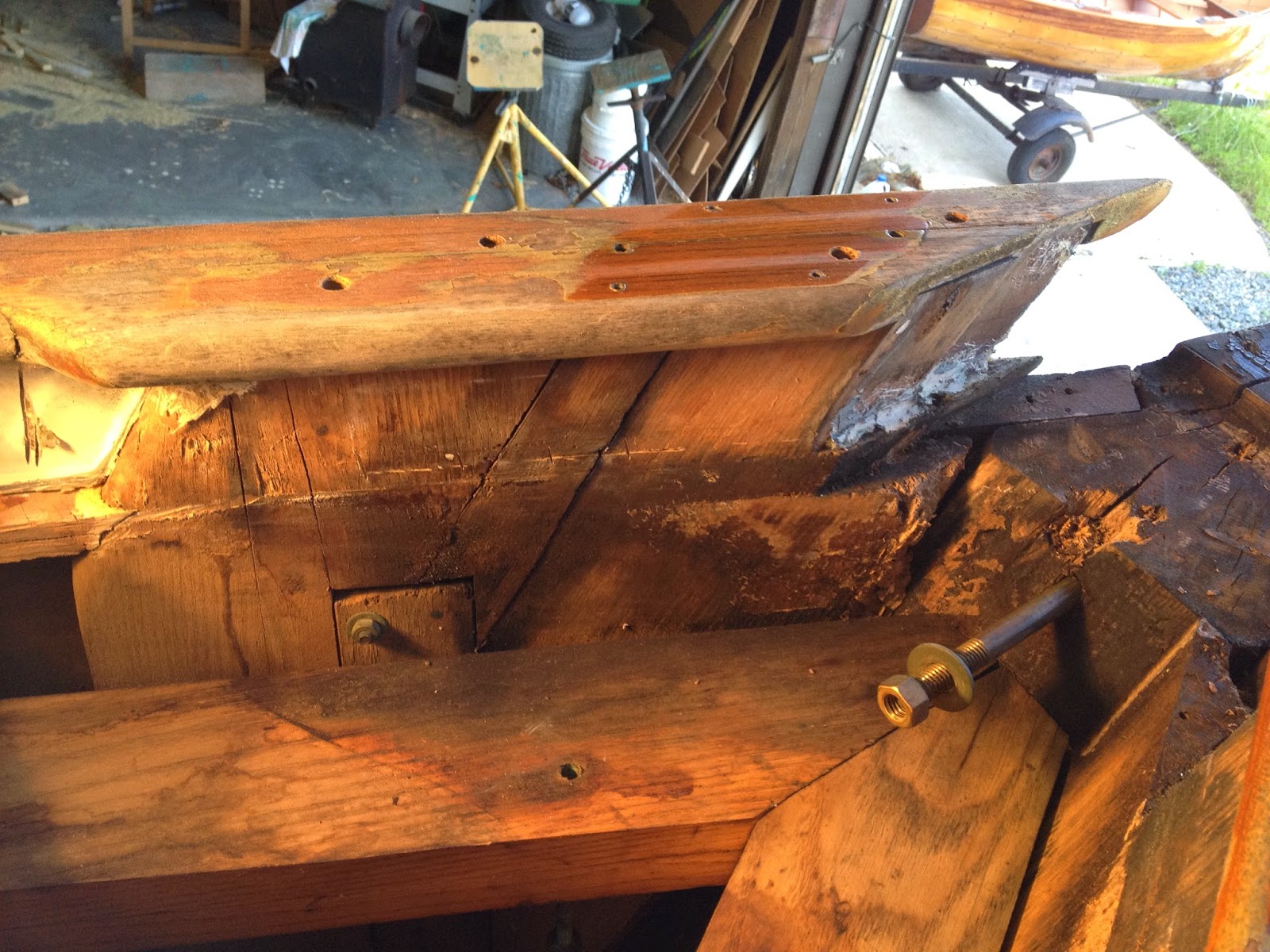 As a minor note, the gammon knee is affixed to the stem with three screws, a long bolt going through the knee and stem and exiting inside the bow, and a lag bolt on top (starting at the stem and going outward toward the knee). The through bolt caused some concern because you cannot get at it from inside the vessel unless you remove the samson post (not for the faint of heart or weak of will, trust me on that). So, the fact I had to remove some decking was a help as the end of the through bolt is accessible just below the framing in the picture. 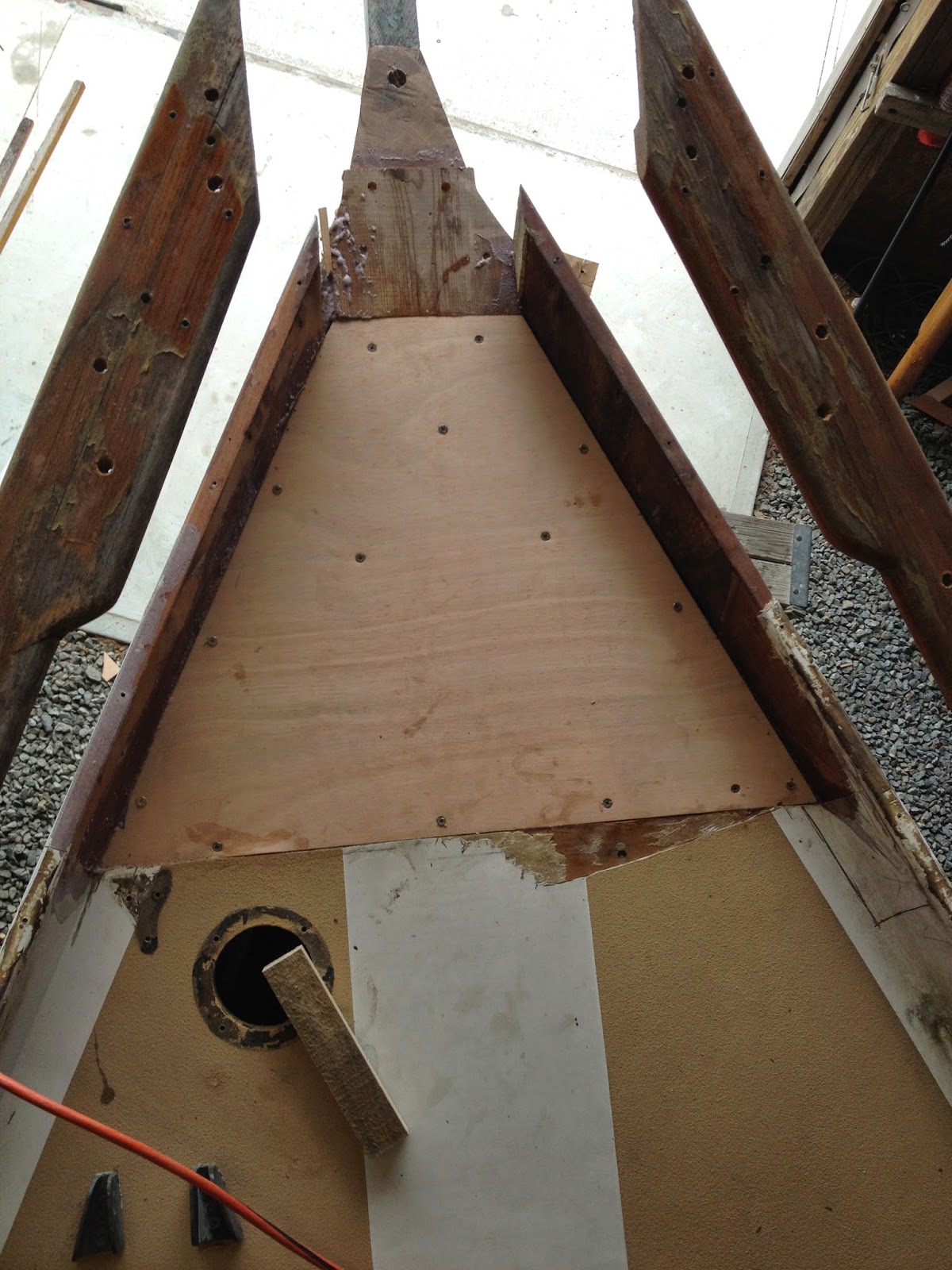 So, we decided to cut the top of the knightheads off just below deck level and extend the breast hook and new decking out to the edge.

To finish it off, I will use another block of wood to act as a backing block to the railcap and the chocks on it.  I will cut back some more of the fiberglass deck, fair the edge and lay down new glass. Fair it, paint it, re do the non-skid areas, etc.

Back to the Stem

Before we did all that, though, we scarfed in a new piece of the stem. I say "we" because I am indebted to Aaron Snyder, who is a shipwright currently engaged at our yard (although I did pay him, so I can't be that indebted. Anyway, he does good work). He did in 15 hours what it would have easily taken me ten times as long.

I also make a point about writing that the stem was redone before the deck was replaced. This was important for a number of reasons but only one was paramount. Because the through bolt for the gammon knee goes through the knee and the stem and you cannot reach the nut to secure if from down below, we had to leave the deck off until that operation was complete.

With the bow and the cabin top 95% complete, the only other major structural part of this project is the mast. For that, see my post Critters in the Mast. This leaves me with an extremely long list of cosmetic items, but cosmetic items are not hard, just time consuming. . . .