Adagio is back in the yard after a short, six week season and I cannot be more pleased with the way she handled.

During her short season, she was a busy girl:  She had her first sail in 16 years, she was on display at the Antique Boat Festival in Salem, she rafted alongside Motif 1 in Rockport and took on 30 knot winds burying her bowsprit a number of times.

In all that,  the only major problem I had was that the shells of some of the blocks started to part under load. That's it. And that isn't terribly surprising given that the polyester epoxy that held them together was at least 16 years old. She didn't sail to windward as well as she should, but that was expected as it was clear during the mast stepping that the length of both headstays need adjustments - adjustments she'll get next year.

Anyway, she has been the Belle of the Ball for sure and gotten her picture taken repeatedly. During the Salem show some of her most ardent admirers were judges who themselves were wooden boat surveyors.

But that chapter in her rehab is behind us and a new one begins. This winter will focus on her interior which I did not touch during this rehab thus far. To be fair, it isn't in bad shape, but it is in need of refurbishing. New paint, new varnish, some minor carpentry and much updating. 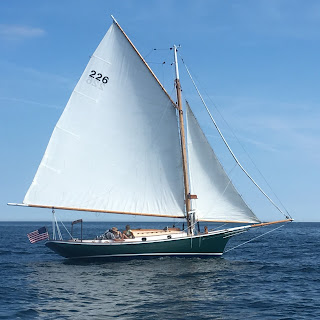 The holding tank is cracked and the head should be rebuilt (gaskets and whatnot). The electrical panel doesn't stay securely fastened, the face panel to drawers don't stay on, and the water tanks have not been tested. On deck, I need to make some adjustments to the rig, as well as the main hatch and the skylight. Also, the anchor does not cat on the bowsprit properly. 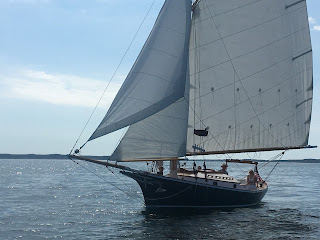 So, all pretty typical stuff and it is fair to say that she will splash much earlier next year and put some miles beneath her keel before year end.