The last two winters in New England have been beautes! Total snowfall this winter was over 9 feet which set new records around here - five and half feet of it fell in February alone. The good news at the boatyard was that the snowdrifts were so high, no boat was in danger of tipping over in the hellacious wind.  At worst, they might heel a bit, but nothing more.

Well, with winters like that, it's good to have lot's to do in the shop. This was a winter of organizing and doing a lot of little things. Two of those things were, carving a name board and reconditioning the trailboards.
Carving a Name Board

I took this project on because I wanted to learn to how to do it. To those who have done this, or who do it for a living, what I am about to reveal is not new. For the rest of you, it is Gold: Make sure your tools are honed to a razor's edge. Or, as we say in the New England woods, "make shuwa yah chisels are wickahd shahp. My lesson learned here is that if they are not, it will show up in your work directly.

So I learned how to sharpen chisels (and planes, scissors etc.)  - a useful skill and one I will use repeatedly. There are several very good resources on the web for those interested in learning more about this, so I won't go into it in detail here (although I provide some links below). I will only say that if you want a good job (and why do it otherwise), the tools must be sharp.

At any rate, since I didn't know what I was doing, I decided to savage a piece of pine rather than mahogany first time out. From Home Depot then, I got a four foot plank of white pine and started to outline the edges of the board and consider the letter spacing.

The goal here was to focus on the technique of carving the letters and I resolved to keep things pretty simple (no fancy carved scallop shells or mermaids - I will save that for the mahogany).  The letters were printed from "Word" and then transferred to poster board to make a template.

Next, using a small hand-held router, I gave the edges a simple bevel.

This is where the pine board is savagely attacked by what I thought were sharp chisels. It was here I learned that "sharp" has to mean "really, really sharp - no kidding."  But that is why it is a practice piece.

Oh, one other piece of breaking news: you can't carve through a field of knots on a pine plank and expect it to come out looking good. Your chisels can be sharp enough to split light and it won't be enough.  Academically, I knew at least that much, but it was interesting to see it in action.

There are also a number of videos on carving letters. Again, the techniques vary and you just have to find the one (or ones) that fit your style, but they are instructive to be sure. Once the letters were cut out, I thought, well, what if I just painted this up (it's knotty pine after all)? My original idea for the final product was varnished mahogany with gold lettering, but since this was knotty pine, that wouldn't do.

So, what would it look like with the traditional gold on black?  Even if it never sees the ocean, it might look good hanging in the shop. This, by the way, is how projects take on wings and a mind of their own. 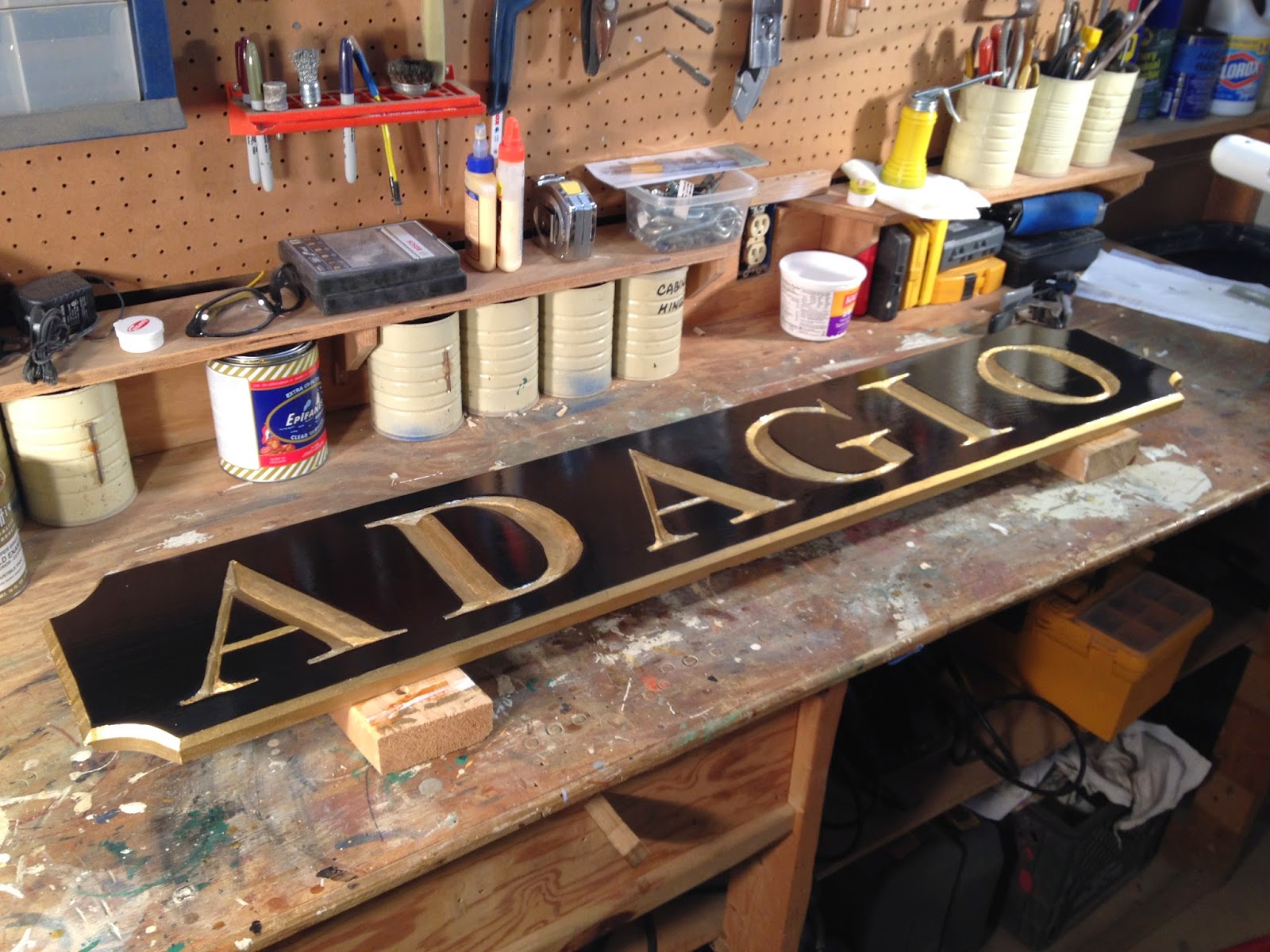 Stong shory lort, after a couple of coats of primer I painted it black and trimmed the edges and letters in gold.  The sheen comes from the two coats of varnish I applied over the whole thing when dry. I have to say, I was pleased with the result - it certainly passes the 10 foot rule - and given the size of the punch list still to go, it is quite possible that this savaged piece of Home Deport pine will adorn her stern for this season anyway.

Adagio's trailboards were much like the rest of her. Fundamentally sound, but in need of some repair and reconditioning. 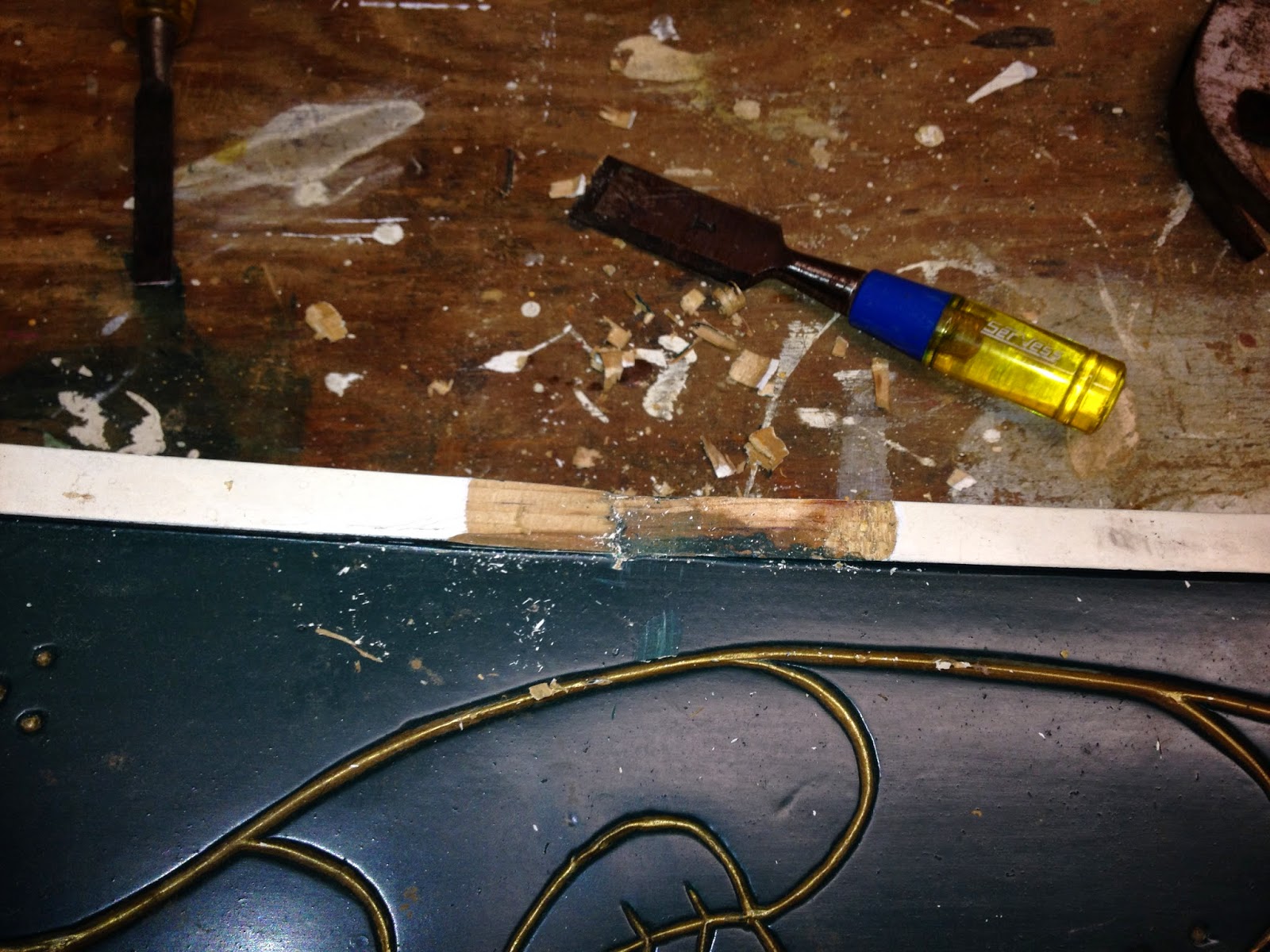 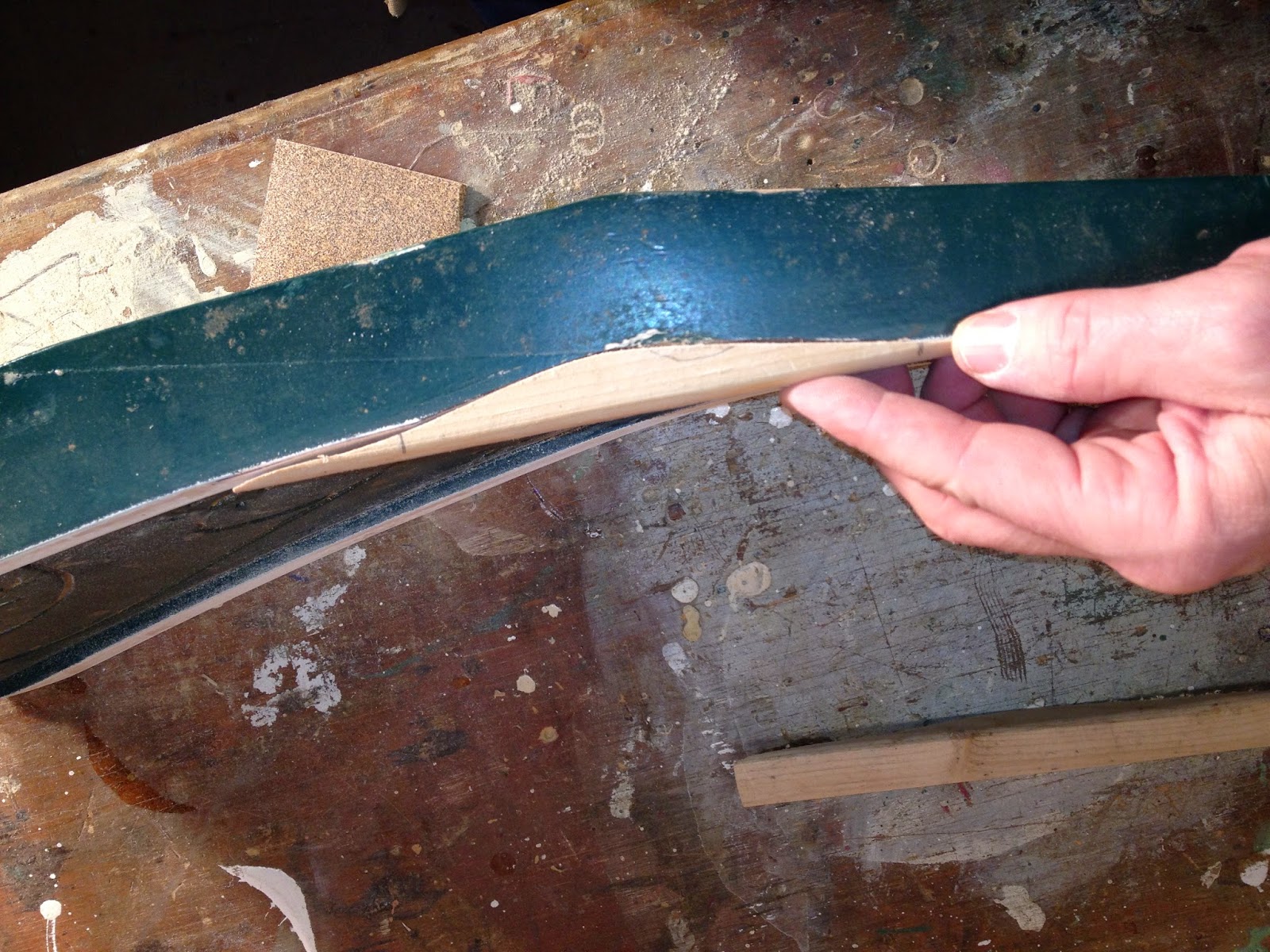 The port trailboard had a piece missing from the trim - no doubt from an anchor fluke that got away while hauling and took a divot out of the trim.

So, I shaped a small scarf out of some scrap lumber and fitted it into place. Three clamps, glue and 24 hours later, it is fit to start shaping to the curve of the trailboard. It took awhile to get the taper right, but it was either that or shovel snow, so time was of no consequence. 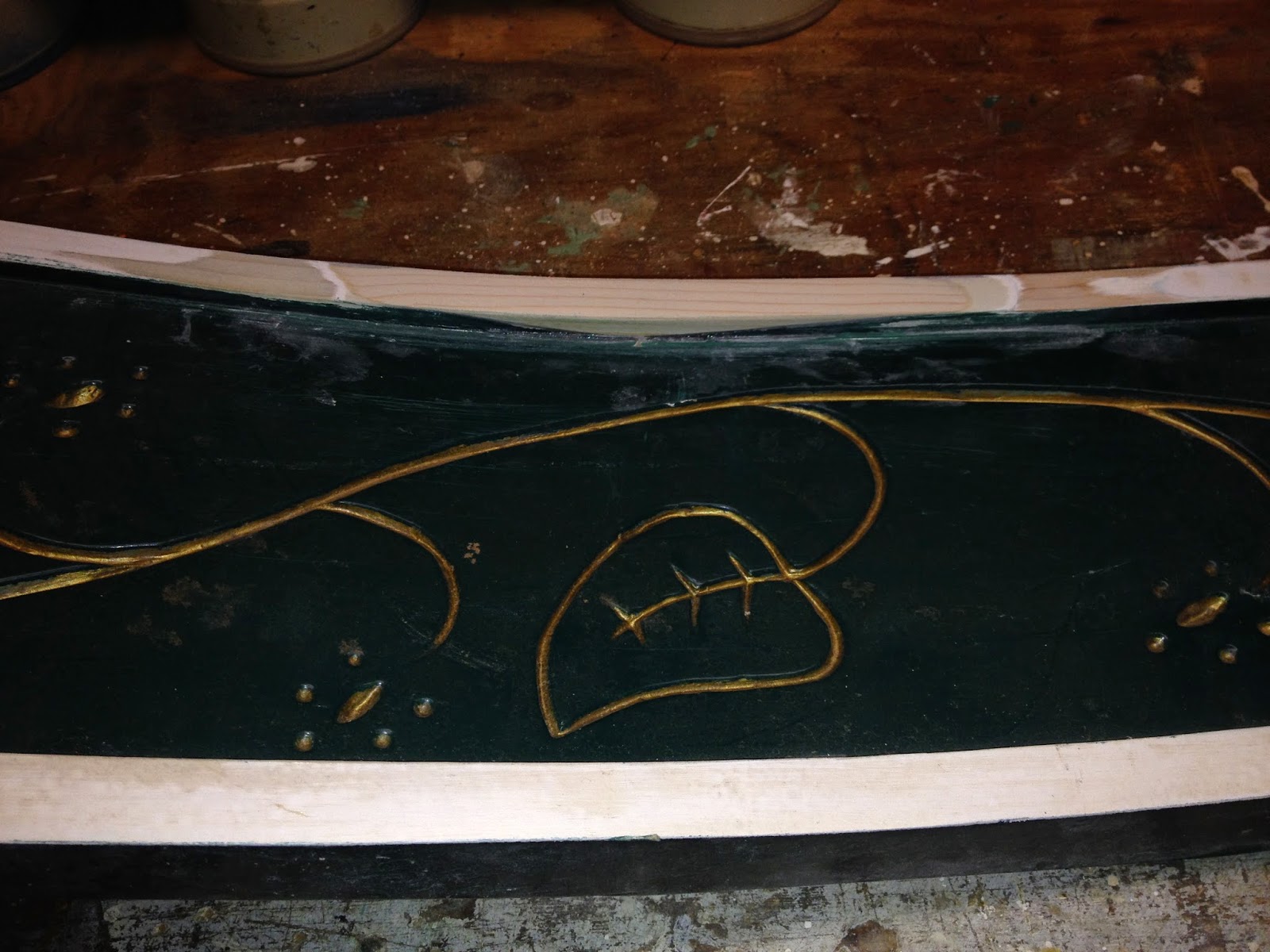 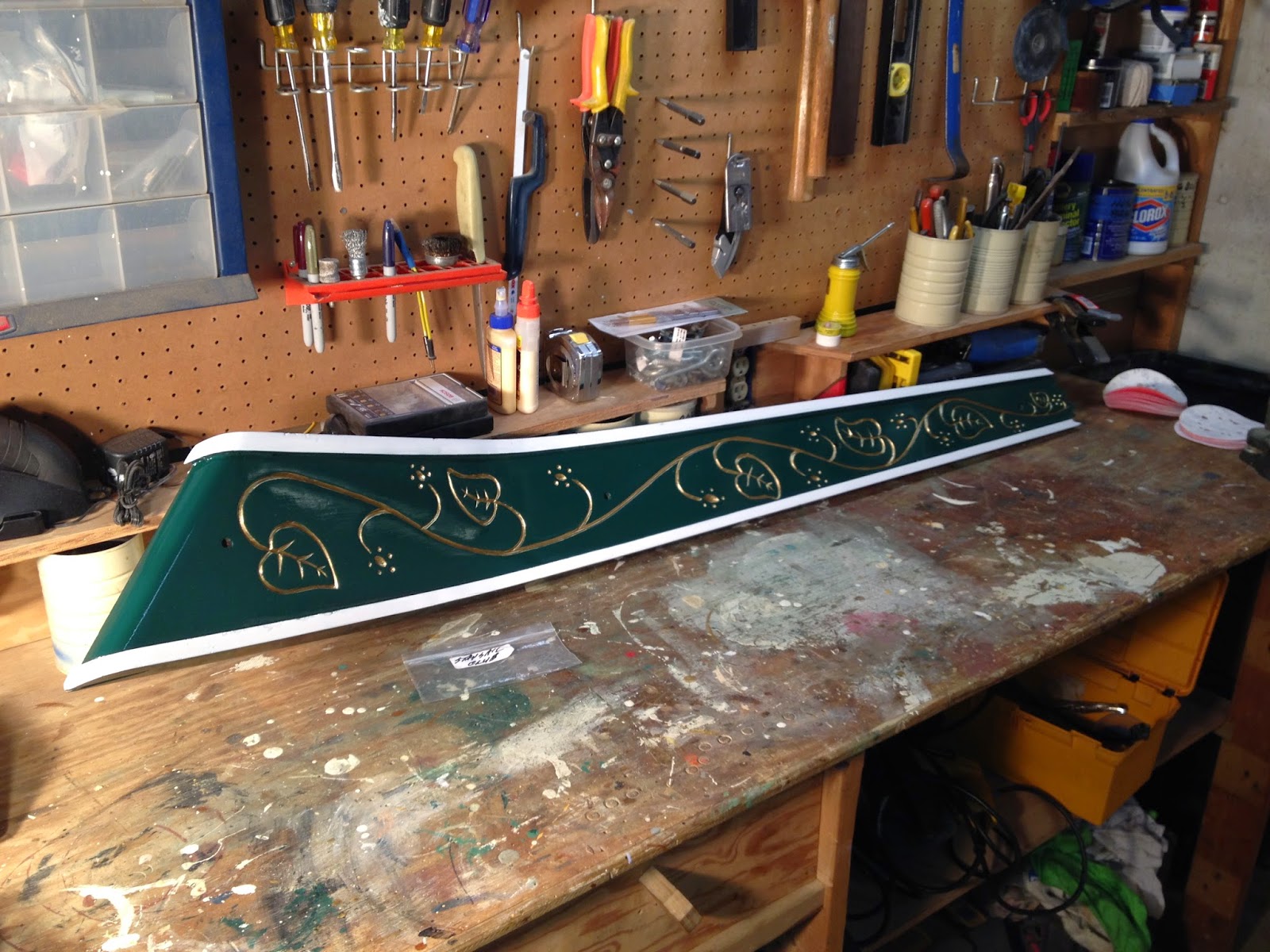 On the left, the scarf is fitted and tapered.

On the right, the finished job (what appears to be a white smudge at the left end of the board is really a reflection from the light). Interlux Sea Green with white trim and gold vine design. Very slick.

When my children were young, they enjoyed a book called "If you give a mouse a cookie." The story went on to describe all the things that will happen after the mouse gets his cookie (he'll want milk, a place to nap, a game to play after his nap and so on). It describes the interconnectedness of things.

And so it is with boats.  In order to do these projects, I needed to re-condition my chisels. This required a shelf for my bench grinder and storage for the various whetstones. To build the shelf required paneling the wall and running wiring to the socket and then, once the chisels were sharp, I needed a chisel rack to keep them handy (BTW, that chisel rack is Sitka Spruce left over from the mast work). 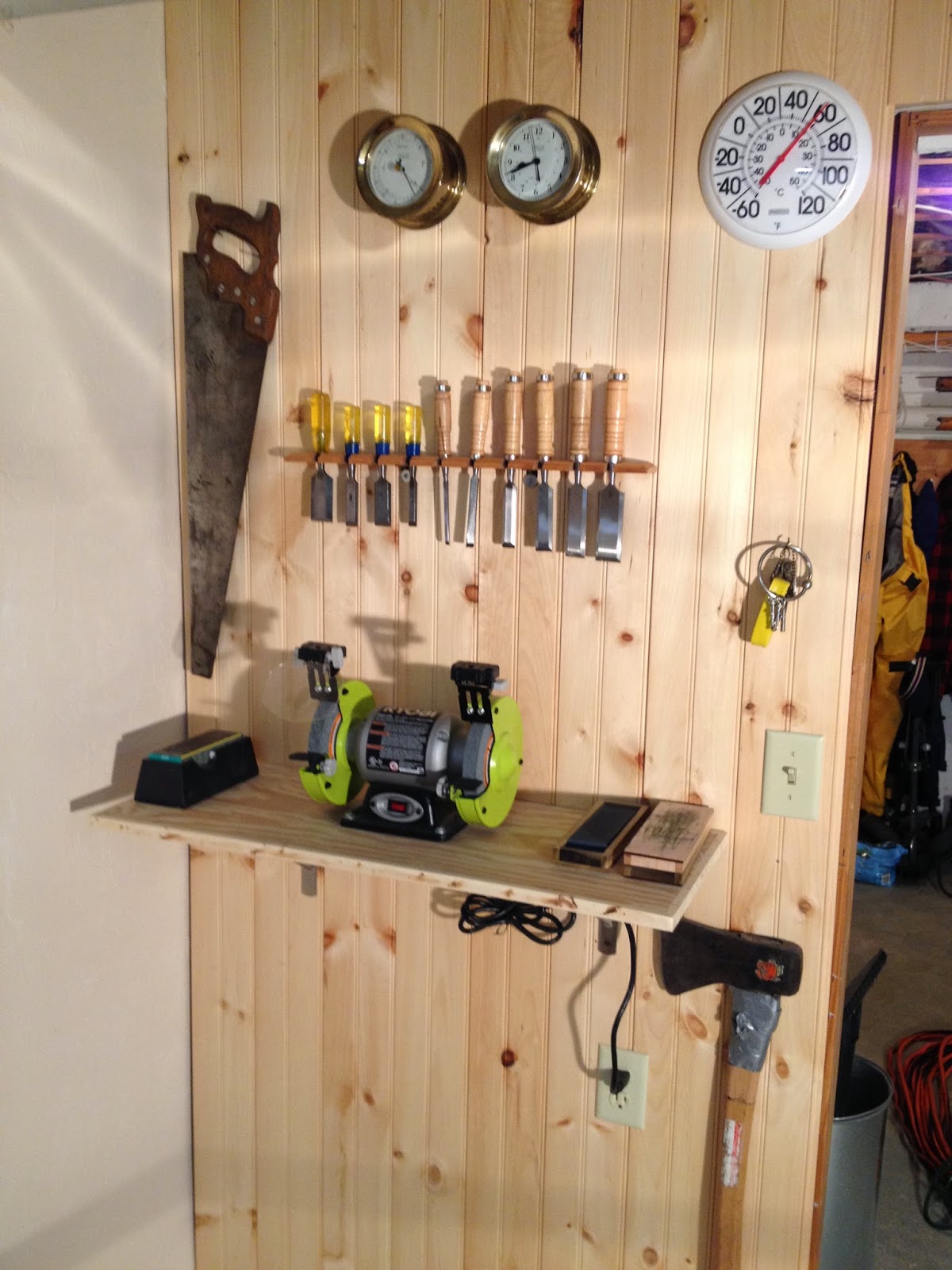 So, the moral to this story is, don't eat the cookies . . . and keep your chisels sharp.

References
1. Paul Sellers has a series of very good videos on a variety of chisel and plane related projects and techniques. In this one he takes some fairly inexpensive chisels and makes them worthy: https://www.youtube.com/watch?v=Ki8tt-VjwqI
2. M. Scott Morton of Highland Woodworking uses a slightly different method than Sellers, but does a good job showing the flat of the chisel:https://www.youtube.com/watch?v=CADqyYA_e-U
3. Harry Bryan is an old Maine boatbuilder and does a series of very good videos for OffCenter Harbor. This site requires a subscription (which anyone interested in classic craft should get) so it might not be available.  http://www.offcenterharbor.com/videos/sharpening-plane-blades-part-1-harry-bryan/
4. Carving Letters: http://www.offcenterharbor.com/videos/wood-carving-part-2-carving-letters/
Posted by Jim Thoen at 6:28 PM 1 comment: