Adagio Has a Wet Bottom 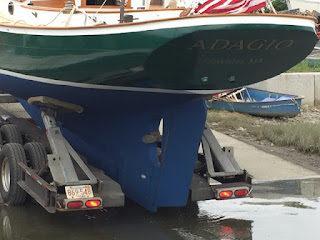 A small group of close friends helped us celebrate the day which came with a dry, slightly overcast skies and a 10.5 foot tide.

My wife Jan launched the ship by doing the ceremonial honors (which is her prerogative of  course).


The boatyard is a tidal estuary. At low water, there is none. So, when you draw five feet, you want all the water you can get. Tuesday came courtesy of a 10+ foot tide and was perfect.


I stayed on board Tuesday night tied to the dock where I had shore power and a sump pump that can move a tennis ball through 30' of garden hose if I needed it. But I didn't.  By midnight, she had stopped visibly leaking.

There are still a gajillion things to do and adjustments to make, but that will always be the case.

For right now, I am just enjoying the moment.